In the early 20th century the German Medical Association was highly regarded as forward-thinking and focused its efforts on promoting public health but from the 1920s this started to change. Adolf Hitler’s power was growing and National Socialism was spreading across Germany. At the same time there was increased interest in seeking to use biological means to achieve racial purity and, ultimately, this became central to Nazi ideology. This ideology was implemented by the medical establishment in Germany which was firmly under the control of the Nazi Party.

The events of the war years marked a significant shift in thinking about research and what could be done in the name of science. The rights of research participants were ignored with researchers prioritising the needs of a nation at war above the rights of individuals. The inhuman experimentation, and the suffering and death that resulted, are well-documented and don’t need to be described again here. 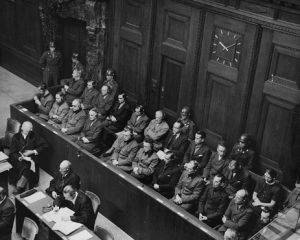 After the end of the war a number of war crimes trials were held in the highly symbolic city of Nuremberg. During these proceedings the joint allied powers tried those considered responsible for many of the war crimes committed during the war years. One of these trials focused on the doctors and others who were involved in harmful and unethical human experimentation. The judges issued their verdicts on 20th August 1947. Of the 23 on trial, seven were acquitted, nine were sentenced to periods of imprisonment of between 10 years and life, and seven were sentenced to death.

The Nuremberg Code was published later in 1947 and highlighted 10 ethical principles. The first principle stated that ‘The voluntary consent of the human subject is absolutely essential’. It is significant that the need to always seek freely given informed consent was placed at the top of the list and this principle has remained at the heart of all ethical codes and guidelines that followed the Nuremberg Code. The Code was written in the hope that it would help to ensure that events such as those occurring before and during the war years might not happen again.

There are three main ways in which the Nuremberg Code has had an impact on our current thinking around the ethical conduct of research; by seeking to ensure ethical oversight of researchers, by introducing a code of practice unique to researchers and by ensuring that researchers and society remembers what can happen when participants in research are not treated in an ethical manner.

The Nuremberg Code was not, and has never been, officially adopted by any nation or by any organisation. Initially the Code was ignored in the belief that its content was not relevant to civilised researchers. This argument was based on the assumption that those who engaged in inhuman experimentation during the war were not civilised and that all those who might undertake research after the war would always behave in a civilised manner. The subsequent history of research ethics has demonstrated that this was a false assumption. The Nuremberg Code was the primary impetus for the development of Research Ethics Committees (RECs) that now provide ethical oversight on research involving human participants. It is no longer acceptable for researchers alone to decide if their research is ethical but all research involving human participants is required to undergo independent ethical review. The principles that guide RECs have evolved from those first detailed in the Nuremberg Code.

Those who wrote the Code will have been aware of the Hippocratic Oath but also recognised that on its own the Oath was not enough to prevent unethical research from happening. The Nuremberg Code was written as an additional Code to sit alongside the Hippocratic Oath. Both have much in common but the the research Code leaves researchers in no doubt about what is expected in a research context. Similarly, nurses who undertake research are expected to adhere to the Nursing and Midwifery Council’s (NMC) ‘The Code’ but are also expected to adhere to codes written specifically to guide the ethical conduct of research. The Nuremberg Code was the first widely published additional research code and has influenced many of the guidelines to follow it, including the Declaration of Helsinki.

3. Remembering the victims of unethical research

Many have suffered and died as a consequence of unethical research. This happened before World War II and has undoubtedly happened in the years after the war. Even during the war years the unethical conduct of research was not only happening in Nazi occupied Europe, but also in Asia, in the USA and even in the UK. It is, however, the events recounted during the Nuremberg Trials, and resulting in the publication of the Nuremberg Code, that best remind researchers and society what can happen when human rights are ignored and when research ethics is not taken seriously. All researchers should take time to reflect on key historical events in the history of human research and research ethics.

In contrast to the inhuman experimentation occurring during World War II, which caused harm and suffering to very many people, in the next Blog in this series I will explore the case of a single person … Henrietta Lacks.

One Response to The Nuremberg Code (1947)

This site uses Akismet to reduce spam. Learn how your comment data is processed.

← The legacy of the Tuskegee syphilis study Henrietta Lacks →

View a full archive of all our posts

Have the Clinfield Newsletter delivered straight to your inbox, with details of our courses, new blog posts & topical articles.